Patricia advises civic and business leaders on the dynamics and creation of positive urban change.

This draws on 25 years of influencing and improving urban environments and economies, pioneering many of the initiatives that form part of London’s evolution and a foundation of current urban practice.

She was CEO of Central London Partnership (CLP), which advanced the link between a people-focused, liveable, London and sustained economic success, as well as building the active private sector investment and stewardship for this step change. She led a number of game-changers for London – including lobbying for Trafalgar Square’s pedestrianisation; establishing BIDs into the UK; Legible London, London’s connected wayfinding system; alongside key studies like Gehl’s Public Life, Public Space and Quality Streets, the first examining the relationship between investment in place and economic competitiveness.

Her pro-bono and trustee positions include chairing London Festival of Architecture and as, Deputy Chair of the Mayor’s Design Advisory Group, helping develop the Good Growth Agendas and concept. Current roles include Vice Chair of British Property Federation’s Development Committee, and a member of Historic England’s London Advisory Committee and its national equivalent, HEAC, and HS2’s Design Panel. In 2019 she founded London 3.0; a refreshed look at what ‘good looks like’ aimed at shaping 21st century solutions and stewardship for contemporary London challenges. 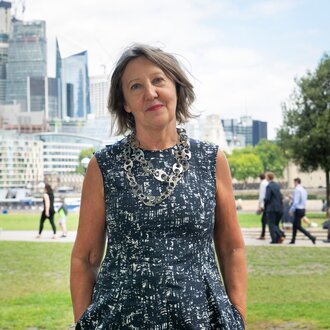